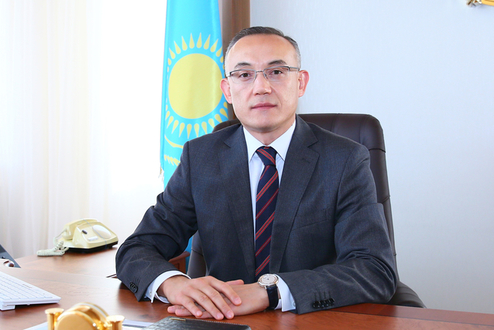 The candidacy of G.O. Pirmatov was approved by the decision of the Sole Shareholder of the Company - Samruk-Kazyna. As the head of the Fund noted, G.O. Pirmatov is professional leader with experience in the nuclear industry. In 2009-2011, G.O. Pirmatov held the position of Vice-President for Economics and Finance of Kazatomprom. In 2011 - 2015, he was in charge of the mining company Cameco Kazakhstan.

– Galymzhan Pirmatov is highly qualified specialist well known in the nuclear industry. He is profoundly aware of this industry, so he will be able to fully implement the tasks and goals facing the company, and bring the system reforms that are currently taking place in the industry. – Shukeyev said.

The former head of Kazatomprom, now Deputy Prime Minister of the Republic of Kazakhstan, Askar Zhumagaliyev attended the meeting as well. He thanked the management of the Fund and the staff of the National Atomic Company for their joint fruitful work and wished the new leader every success.

Let us recall, that on August 29, 2017, Askar Zhumagaliyev was appointed as Deputy Prime Minister of the Republic of Kazakhstan in accordance with the Presidential Decree.

In different years he held the positions of the financial director of JV Altyn-Tas, the director for investment of AIG Silk Road Capital Management, the director of the investment banking department of Halyk Bank JSC, Vice-Minister of economy and budget planning of the Republic of Kazakhstan, Vice-President for economics and finance of NAC Kazatomprom JSC, President of Cameco Kazakhstan, Deputy Chairman of the National Bank of the Republic of Kazakhstan.