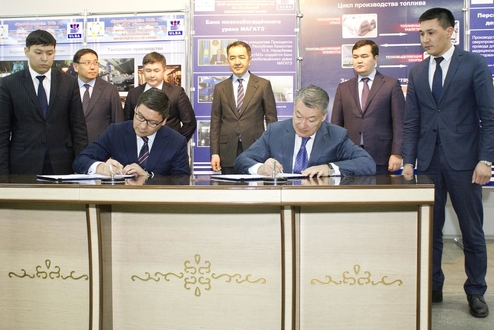 Today, on March 16, 2017, in Ust-Kamenogorsk city within the working visit of the Prime Minister of the Republic of Kazakhstan Bakytzhan Sagintayev to the East Kazakhstan region, Memorandum of Cooperation was signed between Kazatomprom, Ulba Metallurgical Plant JSC and the Akimat of the region.

The subject of the memorandum is the cooperation of the parties in the sphere of social and economic development of the region, aimed at further development of the economy and social sphere, raising the level of citizens' well-being.

Chairman of the Board of NAC Kazatomprom JSC Askar Zhumagaliyev and Akim of the East Kazakhstan region Danial Akhmetov attended the ceremony of memorandum signing.

According to the document, the plant will take an active participation in the implementation of social and economic development activities in the East Kazakhstan region. In view of this, the company will transfer KZT 3 bn to the regional budget within 2017-2019, in addition, new jobs will be created within the investment projects.

Ulba Metallurgical Plant, the subsidiary of Kazatomprom, is currently implementing a number of investment projects in the East Kazakhstan region, including the production of fuel assemblies for nuclear reactors with a capacity of 200 tons per year.

Within the memorandum, the Akimat will assist in the organization of professional training, retraining and advanced training of employees of the Ulba Metallurgical Plant.

The CEO Askar Zhumagaliyev and the head of the university Zhasulan Shaimardanov agreed on cooperation in basic and applied research in the nuclear industry and alternative energy, in mining and processing of rare and rare-earth metals in order to diversify production and to train personnel for the national atomic company.